We are living through an interregnum, as my colleague Neal Lawson likes to call it. The old order is not quite dead. Nor has the new yet been born. Trust and truth are the interregnum’s most high-profile victims.

World leaders in business and politics continue to trumpet trust – fussing over the sobering findings of the Trust Barometer while spewing seemingly endless corporate promises from the mountaintop at Davos. The World Economic Forum remains a powerful symbol, bereft of self-awareness or irony, of the dying world of old elites – with leaders still obsessed by risk-averse, message-drone delivery often rich in platitudes and poor in substance.

The fight for truth, meanwhile, is likely to be the pre-eminent battleground of 2017 – framed early-on by President Trump’s constant attacks on the media and the farcical post-inauguration White House Press Conference hosted by Sean Spicer. Both men are profoundly guilty of ‘gaslighting’ but the fourth estate is not free from blame. The media’s own agenda is frequently as distorted by corporate imperative as a CEO’s selfish needs, an automaker’s emissions data, an NGO’s search for funding or a politician’s lust for power. Everyone bends truth to his/ her own will and purpose. Collectively, we have been on a slippery slope for the best part of a century. We are living with the consequences of 100 years of the PR age.

“In a time of universal deceit”, wrote George Orwell, “telling the truth is a revolutionary act”.

There is a truth, for sure, in the Trump or Farage assertion that “power” needs to be returned to the people because the old system is broken and is not fair for all. In this sense, these men are revolutionaries. But then so were Hitler, Stalin and Castro. To replace one truth with another – one elite with another – and to establish a new tyranny of the minority does not provide the pathway to greater truth or trust. This seesaw of elites can only prolong the interregnum and delay or destroy any hope for the restoration of trustworthy behaviour.

The positivity of the Women’s March on Washington (and elsewhere) offers a hopeful pivot point from old to new. But, like Occupy before it, optimism will stultify if the new world fails to become rooted in actions, not words. We all need to be the change to end the interregnum.

Common Good should be the marchers’ lodestar. Common Good must be stripped bare of remaining political overtones, mischievously imposed by the free-marketers and libertarians of old. The public or common good is historically rooted in Thomasian and Greek philosophical thinking and should be celebrated as such. Common Good is not the property of the progressive left.

In the workplace, common good can prevail. CEO Paul Polman has called for Unilever to become the world’s largest NGO and, while he has his cynical detractors, he also has a point. Organisations such as his enjoy the privilege of collective power and scale and can properly stand for everything – openness, tolerance, fairness, equality and justice – that speaks to the common good. Common purpose can be defined, spoken and shared in a new negotiation between employees, customers and stakeholders, rather than conveniently bought off-the-shelf in an alternative excursion of conscience. The world urgently needs an enlightened network of corporations that prosecute the Polman ideal.

I am proud to be working on a number of initiatives that can help us all be the change and champion Common Good. The global Responsible Tax project recognises taxation as the social compact – at the heart of the relationship between government, business and society. It understands that there are no easy answers – and demonstrates real courage to look and listen beyond conventional echo chambers. A corporation, in this case KPMG, is rightly playing an activist role because “men on mountaintops, shouting through megaphones” is not the way to find a fairer tax system for all. By embracing dissent and demonstrating vulnerability, greater trustworthiness is emerging. This thinking runs to the heart of the Jericho model.

The Future of Work is Human programme challenges the (misplaced) orthodoxy of shareholder value and champions human value instead. A community of over 700 has been convened to celebrate the human at work – as evidenced by last October’s Big Tent and its optimistic outlook for a progressive, human future. The community, set to grow in 2017, again has the bravery to develop radical new thinking around social inclusion, lifelong skills, risk & reward and to question the fetishisation of Google and the near-religious fervour that is building around technology and automation.

The Future of Work programme is determined not to give up on humans as little more than “bad robots” or to simply retreat as old industries inevitably disappear. Diversity of thought is as important as diversity of gender, orientation or race. None of us should be fearful of embracing brave new ideas – for example, banishing crass and competitive measurement systems; placing oracy alongside numeracy in the schoolroom; and promoting a Citizen’s Income or universal basic wage. The new is desperate to be born and dynamic thinking is needed to facilitate the birth.

CIPD – originator of the Future of Work is Human – is of course one of many professional bodies living in the disrupted world of the interregnum.

RICS is also asking important questions around the nature of Public or Common Good, as it approaches its 150th anniversary in 2018. Like many organisations born of the Victorian enlightenment, it is thinking through what its original public advantage/ public interest/ usefulness charter looks like and means in the context of the 21st century and the extraordinary challenges facing professional bodies and organisations, together with cities and the built environment, today. Cities sit at the epicentre of many critical global issues – migration, affordability, shelter, resource scarcity, carbon reduction. It is no accident that cities are themselves everyday crucibles of the common good.

2017 needs to be a year of activism and action. We all need to be participants and march (metaphorically) in our workplaces as well as the malls. Being by-standers is no longer an option if we are to salvage something from the crash of truth and trust. If you want to join us and help negotiate a more optimistic future, the time is now. As these three initiatives show, you will not be alone.

Robert Phillips is the co-founder of Jericho Chambers; author of Trust Me, PR is Dead (Unbound, 2015); and a Visiting Professor at Cass Business School, University of London. This is the third of three articles exploring 2017: A Year of Tomorrow. 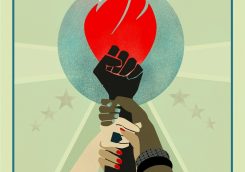