Ahead of its launch, we are delighted to share the introduction to our newest publication ‘What to Tax?‘. This piece, written by Chris Morgan (Global Head of Tax Policy at KPMG International), sets out the key challenges and questions we set out to address concerning what responsible tax looks like in an increasingly digital, global environment.

This is the second in the series from our Global Responsible Tax Project in partnership with KPMG International, the former being ‘Responsible Tax and the Developing World‘ which was released in autumn 2017.

‘What to Tax?’ will be launched at an ideas exchange event on Wednesday 19th September at The Charterhouse in Clerkenwell. Please contact becky.holloway@jerichochambers.com if you would like to register a place.

We look forward to sharing the full collection of articles with you next week. 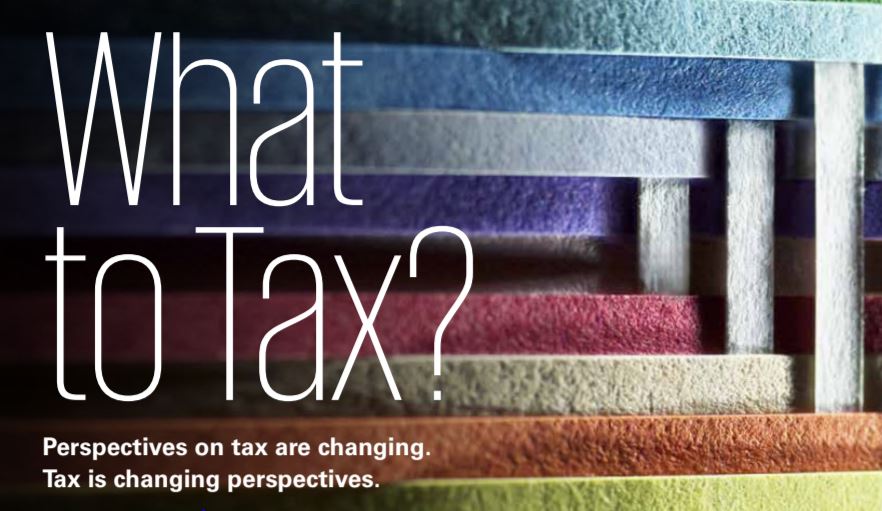 Whether we look at developed countries, with aging populations and growing health and social security bills, or at developing countries needing funds to finance the UN Sustainable Development Goals, it is clear that there is pressure to widen and deepen the tax base. Furthermore, it is often said that current tax systems — particularly corporate tax ones — are no longer fit for purpose in the 21st century. And in some countries the question of ‘fair taxation’ is a hot topic. With all these factors in mind, as part of the global Responsible Tax project, KPMG and Jericho Chambers decided to collate a set of articles, which features a diverse array of voices responding to the question, “What to tax?”

What is the purpose of tax?

Before looking at some of the issues, it is worth thinking about the purpose of tax and the principles of a good tax. There are no exhaustive definitions but the following is a rough guide:

Principles of a good tax system

Discussions on the principles of a good tax system often start with Adam Smith’s The Wealth of Nations. These can be summarized as:

How does the theory translate into practice?

If the answers to what and how to tax were obvious, somebody would have produced a blueprint for a perfect tax system. That this does not exist is due to the fact that different countries have different social, cultural and economic characteristics, and there are varying individual views on how to balance all the factors and set priorities. In the following articles, there are a range of views expressed. We have grouped them into themes of taxing the creation, holding, and spending of wealth and, finally, the future of taxation.

Tax on the creation of wealth

It is often noted that it is becoming harder to assess and collect corporation tax in an increasingly global environment with mobile capital. Furthermore, there are concerns — as explained by Ifueko Omoigui Okauru of ICRICT — that the current system allows multinational enterprises (MNEs) to shift profits from high tax to low tax jurisdictions. This undermines not only the principle of redistribution but also the one of horizontal equity and makes corporation tax an inefficient tax. A proposed solution is to adopt formulary apportionment of global profits. However, Gianni De Robertis of KPMG in Italy, notes that formulary apportionment carries its own difficulties and suggests, borrowing from Winston Churchill’s dictum, that the current arms-length principle may be the worst of all systems “except the rest of them”. The solution may be to improve the current rules instead of completely changing the system. The impact of digitalization increases the pressure on the corporate tax system. John Thornhill, Financial Times, argues that the data revolution is remaking capitalism in radical ways and innovative approaches to data taxation may be needed. Khoon Ming Ho and Conrad Turley, KPMG China, provide a detailed analysis and query whether the real issue is not more to do with identifying the location of investment rather than the use of digital technology. Nevertheless, many countries are now introducing specific digital taxes with the EU Commission, in particular, making this part of its ‘fair tax’ agenda. Shikha Mehra of Mainchain argues that blockchain developments will enable users to own and trade their data, which may make it a taxable commodity in the future. Will blockchain assist with certainty, convenience and economy in tax collection?

The debate about taxing corporations is complicated by the fact that there is no clarity about who ultimately bears the cost. Corporation tax should be a charge on the capital invested, and so, should apply to the investors; but it is often argued that a significant proportion is borne by the consumers or employees. Economists generally agree that taxing employment creates a drag on the economy; Ruud de Mooij of the IMF considers whether it is possible to move part of the tax burden from employment to capital. This would be in line with the principle of proportionality as capital is held disproportionately by the well-off. However, taxing capital can also adversely affect employment, and there
are concerns that it is more mobile than employment, making it less efficient to tax.

In the section on taxing the holding of wealth, Ed Dodson argues that the most efficient tax would be on the potential annual rental of all land, and this would also recognize that land is a public asset and should not be the absolute possession of private individuals. Enid Slack, University of Toronto, and Jo Bateson, KPMG in the UK, debate the pros and cons of property taxes more widely. While they tend to be the least popular of taxes, they are particularly appropriate for financing local government. The emphasis, however, should be on annual property taxes rather than transactional taxes. David Willetts, Executive Chair of the Resolution Foundation proposes replacing traditional inheritance tax rules with a lifetime allowance and restricting pension contribution tax relief to a flat rate so as to make the tax system more
proportional. Grant Wardell-Johnson, however, notes that in practice net wealth taxes have been found to create issues of neutrality, efficiency and equity; the best approach to taxing wealth could be through annual property taxes. Keval Bharadia draws upon his experience while working at the London Stock Exchange to argue that a financial transaction tax on derivatives is an appropriate way to tax the accumulation of capital and reduce inequality. If the answers to what and how to tax were obvious, somebody would have produced a blueprint for a perfect tax system.

Most economists would argue that moving to taxing consumption is the most efficient form of tax as it is least distorting of behavior. However, this is widely considered to be regressive. Christine A. Wernet, University of South Carolina Aiken, suggests ways to make consumption taxes more progressive; while Philippe Stephanny, KPMG in the US, argues it may be more efficient to lower the rate but broaden the base and then use the revenues generated to drive progressivity through other parts of the tax system. Lachlan Wolfers,
KPMG’s Head of Indirect Tax for Asia Pacific region, notes that when it comes to digital transactions, the issue is not what to tax but who should collect it? Another key issue is: Should indirect tax be applied to the growing number of consumer to consumer transactions?

The future of taxation

Finally, no review of what to tax would be complete without looking at green issues. Femke Groothuis, The Ex’tax Project, considers how green taxes can be used to improve health, protect nature, increase tax revenues and drive competitiveness and innovation. Susanne  Åkerfeldt, Senior Legal Adviser at the Swedish Ministry of Finance, provides more detail on how carbon taxes work. Green taxes, though,
do have a sustainability paradox. As Barbara Bell, KPMG in the UK points out, the more successful they are at changing behavior, the less revenue they generate.

Some of the articles express conflicting points of view and undoubtedly there will be opposing views on some of the suggestions. In collating these essays, it is not our purpose to point to one answer or another, but rather to give each of these perspectives a platform, and indeed, to offer these ideas as stimulus for further discussion and debate. 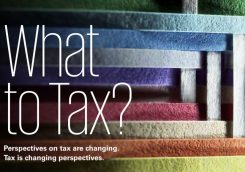