In the second podcast in the series “Social Justice in Tech”, Matthew Gwyther explores themes of power and challenges of trust. The series is produced in partnership with investment bank, Stifel.

In case you missed it, you can find the link to first podcast here.

The US is home to 15 of the world’s 20 most valuable tech firms. In Europe we have one. Big Tech is unquestionably a stateside thing.  Silicon Valley is where the smart ideas find the most willing piles of money. America is also where controversy rages loudly over how to bring the tech giants to heel, so that they act in the public interest. Tech tycoons have faced roastings in Washington for their firms’ privacy lapses. Elizabeth Warren, a senator who is running for president in 2020, wants Facebook to be broken up. She wants a platform utility to be defined as any internet entity with global revenues over $25 billion. In response Facebook’s founder and supreme leader Mark Zuckerberg has said he’s willing to “go to the mat” and fight Warren. Which should make an interesting spectacle as Mrs Warren has recently celebrated her 70th birthday.

In Europe the recently re-appointed competition commissioner Margrethe Vestager has said: “we’re trying to get a hold on this industrial revolution that’s happening right now…it’s very important to get up to speed quickly.”

The author Franklin Foer has argued that tech is different from the sort of monopolies run by robber baron oil tycoons and bankers in the previous two centuries. “More than any previous coterie of corporations , the tech monopolies aspire to mould humanity into their desired image of it. They believe that they have the opportunity to complete the long merger between man and machine – to redirect the trajectory of human evolution.”

The heat is on. Eric Schmidt, who recently left the board of Alphabet,  said during his tenure as executive chairman : “I wake up in the morning and I fight regulation. It’s what I do. It’s my job.” His company has now been censured and fined by the EU three times since 2014 and earlier this year got a ticket for $1.7 billion. The share price went up.

When it comes to competition Big Tech likes to muscle out or acquire any threatening minnows with promising ideas. The FANGS hoovered up 436 companies in the last ten years. Where the argument was once – “It’s free! How can we be anti-competitive if customers aren’t paying for our service” is heard less frequently these days.

So, what is to be done? Governments are frequently ham-fisted when it comes to regulating industries about which they have scant understanding. Where has the trust gone?

This podcast includes interviews with Eithne O’Leary, President of SNEL and head of Group, London, Stifel and also Peter Globokar of Stifel; Baroness Denise Kingsmill one time Deputy Chair of the UK Competition Commission and counsel in anti-trust matters to Microsoft; Sir John Hegarty, one of Britain’s most esteemed ad men and now early stage tech investor; and Rachel Coldicott, CEO of the think tank doteveryone.

For further information on the “Social Justice in Tech.” programme, produced in partnership with investment bank, Stifel, please get in touch. 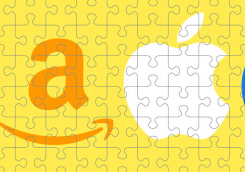