Amanda Mackenzie, in her own words, is “a huge friend, admirer and founding client of Jericho on a secondment from the Executive Committee of AVIVA to Project Everyone”.  Amanda is “working to make the UN’s Sustainable Development goals famous across the world”.

So, 14 months after stepping out from Aviva into the adventure of a lifetime, the end of the first chapter is already here.

You may recall that at the end of last year Aviva made the magnificent gesture to send me on loan to Richard Curtis and Project Everyone to work with the UN on making the Global Goals (for Sustainable Development) famous. The vision was that if we could kickstart achieving the Goals by making everyone in the world know about them then they stood the greatest chance of success. 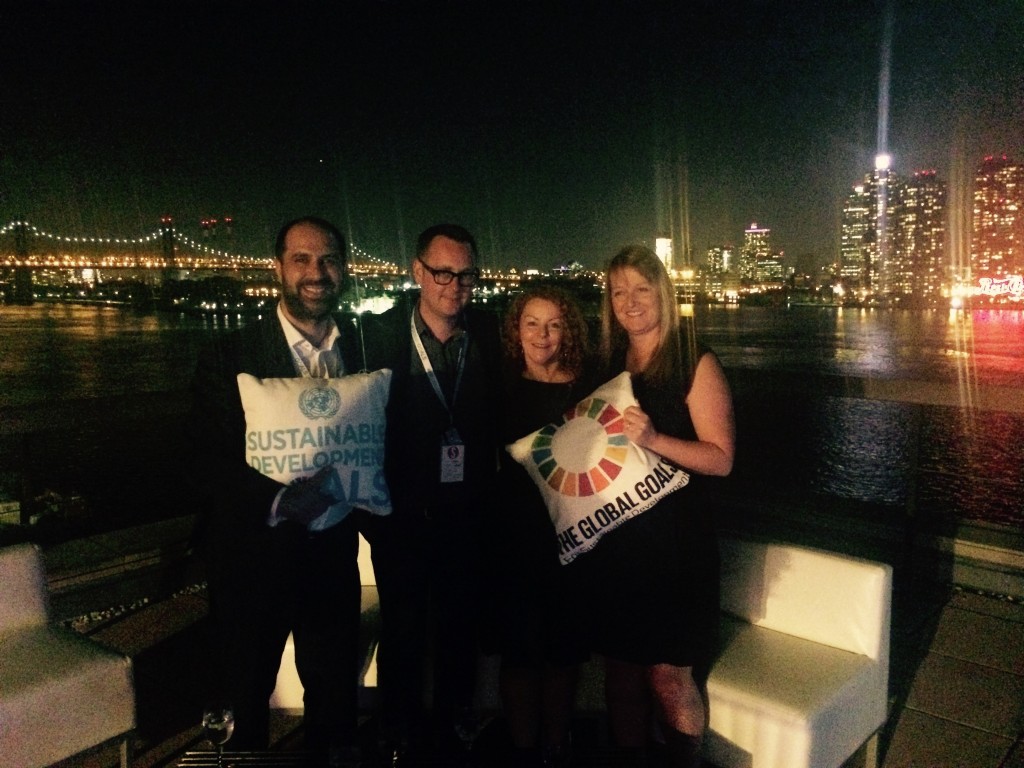 Unlike the Millennium Goals in 2000, these goals – which spanned development, equality and climate – were created by people all across the world and they will only be achieved if we hold our governments to account for achieving them so it made sense that everyone needed to know about them.

In January 2015 we had seed funding from the magnificent Gates Foundation, a small amount of funding from Comic Relief, a generous personal donation from Richard himself and about 10 talented people, 5 of whom were working for no pay. We had Portobello Studios to work in, no infrastructure, no phones or support. But what we did have was an incredible belief that it was possible to make huge inroads to getting to the 7 billion people in the world if you had a clear strategy and you could leverage a lifetime of contacts and therefore garner help from across the Creative Industries, Business ,Technology, Celebrity and Political worlds.

So Project Everyone began to ramp up.  Many conversations had happened throughout 2014 but it was only really at the start of last year that everything became tangible. We needed funding, a plan, priorities, networks and to crystallise all the amazing offers of good will in to real actions that could help achieve the mission. So after months of unbelievable hard work from the most incredible group of dedicated, selfless, tenacious, eternally optimistic and hopeful people, what did we achieve?

“In a nutshell and one number: 3 billion”

That is the number of people we estimate we got in front of following the launch on September 25th 2015. Our total budget was approximately £4.2m plus money-can’t-buy pro bono and if I had to guess well over £100m plus.

I still find myself slightly bewildered saying 3 billion but we had some great help from BCG and Blue 449 to help us with our assumptions and ‘auditing’. We got content into 184 UN countries and several other places like the North Pole & North Korea.

We had a lesson which was shared in 160 countries and millions of children took part. In some countries such as Russia and Lesotho 100% of schools were involved. It was very humbling to see photos and films come in from around the world of the lesson taking place, and schools creating a ‘goal keeper’ who would champion the goals. One of my favourite bits of film was from a South African school hall where a class of 10 year olds had written their own song, asking ‘What’s your super power?

We had Global Goals content played on over 700 radio stations around the world in over 70 countries.

We activated a magnificent effort from the mobile industry, who combined to send a text to almost 1 billion people across the world and hosted content on all their sites with a total customer reach of 3 billion alone.

The digital industry gave us homepages in dozens of countries, and a website in over 22 languages. We estimate 500m views in China on Baidu alone.

We had a multi faith call to pray which we estimate involved c 500m people. Another personal favourite was The Archbishop of Canterbury tweeting his prayer and asking everyone to support Project Everyone.

Richard produced a TV programme which reached a global audience in over 100 countries of c.1 billion.

Brands did us proud:

Like Getty Images who provided the first photographer to ever be allowed to film in the UN chamber and who made their entire inventory free to use, forever, for goals-related imagery.

Standard Chartered were a founding partner (alongside Aviva) and inspired by the Norwich City Football shirt takeover got Liverpool to play in Global Goals shirts for 2 matches during the week. Their estimated reach in to Africa and Asia is over a billion.

Astra our impressive JV partner in Indonesia supported the goals and reached a rather incredible 153million with their campaign.

Richard Curtis and the UK Prime Minister David Cameron shared a stage at UNGA where the PM committed his support and the UN thanked us whole-heartedly. 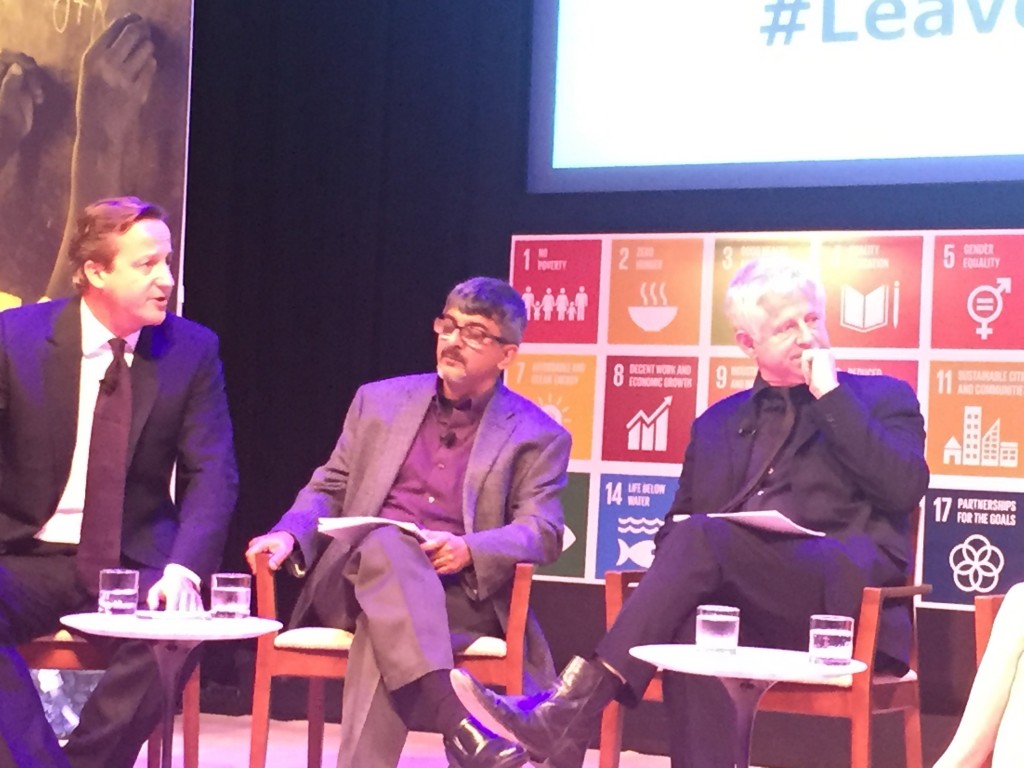 Mark (our CEO), as you will recall, spoke in the United Nations chamber on the day the goals were finally agreed and (sparing his blushes) made quite a stir with some proper commitments which others have already been inspired to follow. Living it not lipsticking it is now the order of the day!

So October came and we returned from New York rather exhausted and a bit bewildered at what had just happened. And then we had to face an unusual problem I am not sure we fully anticipated which was the will of everyone for us to carry on.  So since then we have been looking at our plans going forward. Please do grab a nice cup of something, sit down and allow yourself some time to go exploring on  www.globalgoals.org or click on the video below!

So now we want to ensure all business take up the goals: brand their products so the messaging continues to be amplified, badge existing programmes or do the really hard stuff (which is showing where Aviva excel) and looking strategically at what business can do across its supply chain to be more ‘on goal’. In our case our supply chain is the investment assets we own and the decisions we can make about those and how we invest, or the firms we choose to do business with in general insurance.  Working with the world chambers of Commerce, the UN B Team and Global Compact and the Commonwealth enterprise and investment council.

We have also decided to take one goal this year and focus upon it. So at Davos last week we launched the year of Global Goals for Women and Girls. World leaders, policy heads, foundations, philanthropists and celebrity campaigners gathered to commit their support to making 2016 the year where we truly shine a spotlight on women’s and girls’ issues, in order to make more progress in this area in 2016.

Prime Minister David Cameron restated his government’s commitment to the Global Goals, Melinda Gates ad Sheryl Sandberg explained why their work is dedicated to improving the lives of women and girls, Freida Pinto spoke about her work as an activist, Secretary of State John Kerry spoke about the plight of women in conflict and the urgency of addressing their needs, and Kevin Spacey even as Frank Underwood committed that this was a cause in urgent need of attention this year. 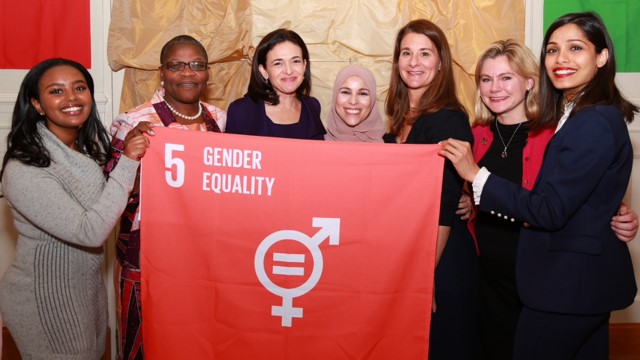 So the plan for 2016 unfolds. A focus on girls, more activity from the mobile phone companies, another lesson and a Global Goals day. We now have to secure funding for several years hence so that what we have started is assured of being achieved. Of course we will only really be able to measure ultimate success in 2030 when we see if the world has achieved the Global Goals.

So I am conscious that having waited so long to write something I am in danger of trying to compete with War and Peace.  But to end here are 10 points I have learned this last year:

My next chapter will be what happens next. I will be setting up a board of trustees over the coming months.

And finally just to recap on the incredible generosity of Aviva for supporting Project Everyone and being that courageous and insightful company which has helped so much else come to pass.

May I finally quote my 84-year-old Mum who always embarks on every year to be the best yet. 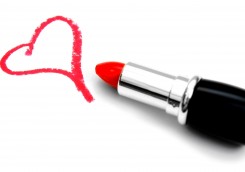