Extract from a long-form article, originally published here on Medium.com .

The UK is the first global economy staring into the face of the 21st-Century Great Restructuring. This restructuring both in terms of speed and size will need to be of a magnitude unwitnessed by a major global economy in modern history (including, I would suggest, China) – in terms of necessary speed of reconfiguration.

Yet much of the public discourse seems stuck on the pretence that the future will be a little bit less of, more of the same – focused on saying the same all things: from Housing Shortage to Tech Start-ups. The solutions to this foundational transition cannot be reduced to just this – I would argue that both are mere figs leafs in the scale of the transition we are facing.

Brexit, Trump and the rise of the far right and wider structural discontent are not baselined against a previous “better world” but the world we have promised each other and the social contract we supposedly operated under – equality, justice, and freedom.

Increasingly, these fundamentals or perhaps their illusion has been visibly undermined – by growing and visible inequality (be it gender pay inequality or concentration of wealth); growing visible injustices (from British MPs expenses scandal to the 2008 financial crisis); to widespread economic precariousness (where work is no longer a route out of poverty).

In this context, Brexit correlates (whether it is causation is up for discussion) with other major shocks and transitions in our economy – either currently apparent or near horizon visible.

Details of some of the major shocks and transitions in our economy, and what these mean for future policies, are available to read here, in the full article, originally published on Medium.com. 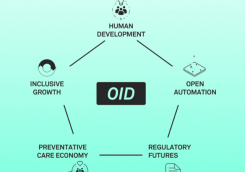