As the December ’19 General Election testified, there is an urgent need to listen and learn from communities, towns and cities across the UK, well beyond the policy-making confines of the capital city. The case for radical de-centralisation/ devolution is powerful and immediate. But London is not without its problems and challenges. In this article, Centre for London Director Ben Rogers brings to life some of the key issues. Centre for London is a longstanding partner of Jericho and Capital & Counties Properties plc, on the London Essays and London Ideas programmes.

In four months’ time, Londoners will head to the polls to elect the next Mayor of London. The candidates will already be developing campaign pledges, testing policy ideas and building their supporter bases.

Anyone running for the Mayoralty will know that London’s population and the problems they face are unique. But what are the developments, concerns, and aspirations that could shape the way Londoners will vote in May 2020?

The city also has a high population turnover. Through processes of birth, death and inwards and outwards migration, around half a million Londoners are lost to the city every year and another half a million arrive.

A large part of this is young people moving to the city in their 20s and leaving as they begin to have families – London remains a mecca for young people. It’s as if every 10 years the whole city leaves and a new population takes its place. 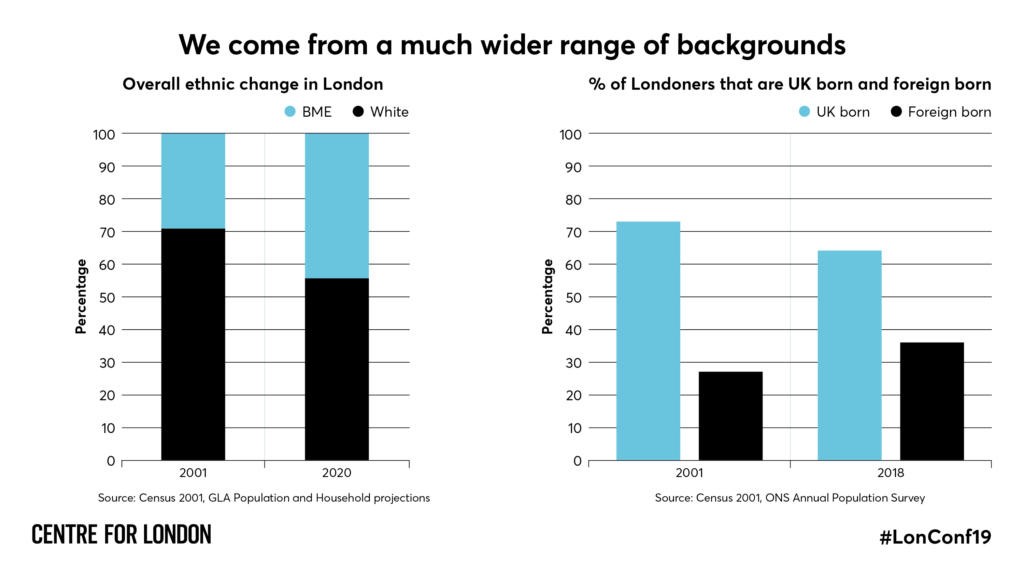 While London has become more diverse, it has also managed to retain a strong sense of cohesion. Over 80 per cent of Londoners say that people from different backgrounds in their local neighbourhood get on well together. And, despite all the churn, people identify strongly with the city. Some 80 per cent say that they belong fairly or strongly to London. This is felt strongest among minority ethnic groups with nearly 90 per cent of people of Caribbean and African heritage saying they feel they belong to London.

How have Londoner’s circumstances changed?

London has got hugely ‘richer’ – at least as measured by property and other assets. Total wealth has increased almost doubled – from £1 to £2 trillion. But wealth is unevenly distributed across the capital. It has all gone to the richest half and even more so to the richest 10 per cent. 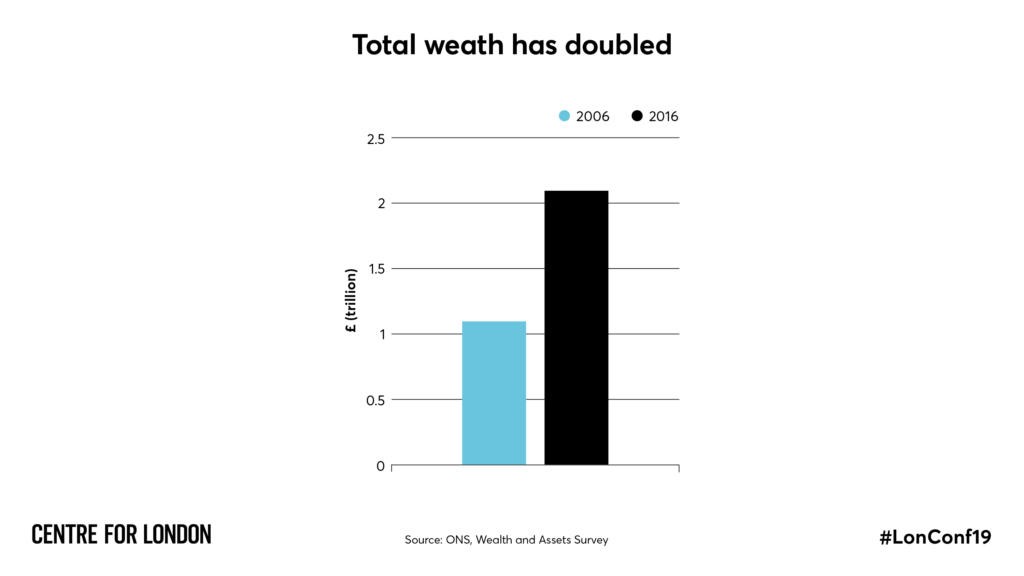 At the same time, the face of poverty is shifting. While London’s headline poverty rate has remained the same for at least a decade at around 28 per cent – much higher than the national average of 21 per cent – there’s been a big rise in in-work poverty and poverty rates in outer London. Shockingly, now one in five Londoners face food poverty and can’t always afford a proper meal for themselves or their family. 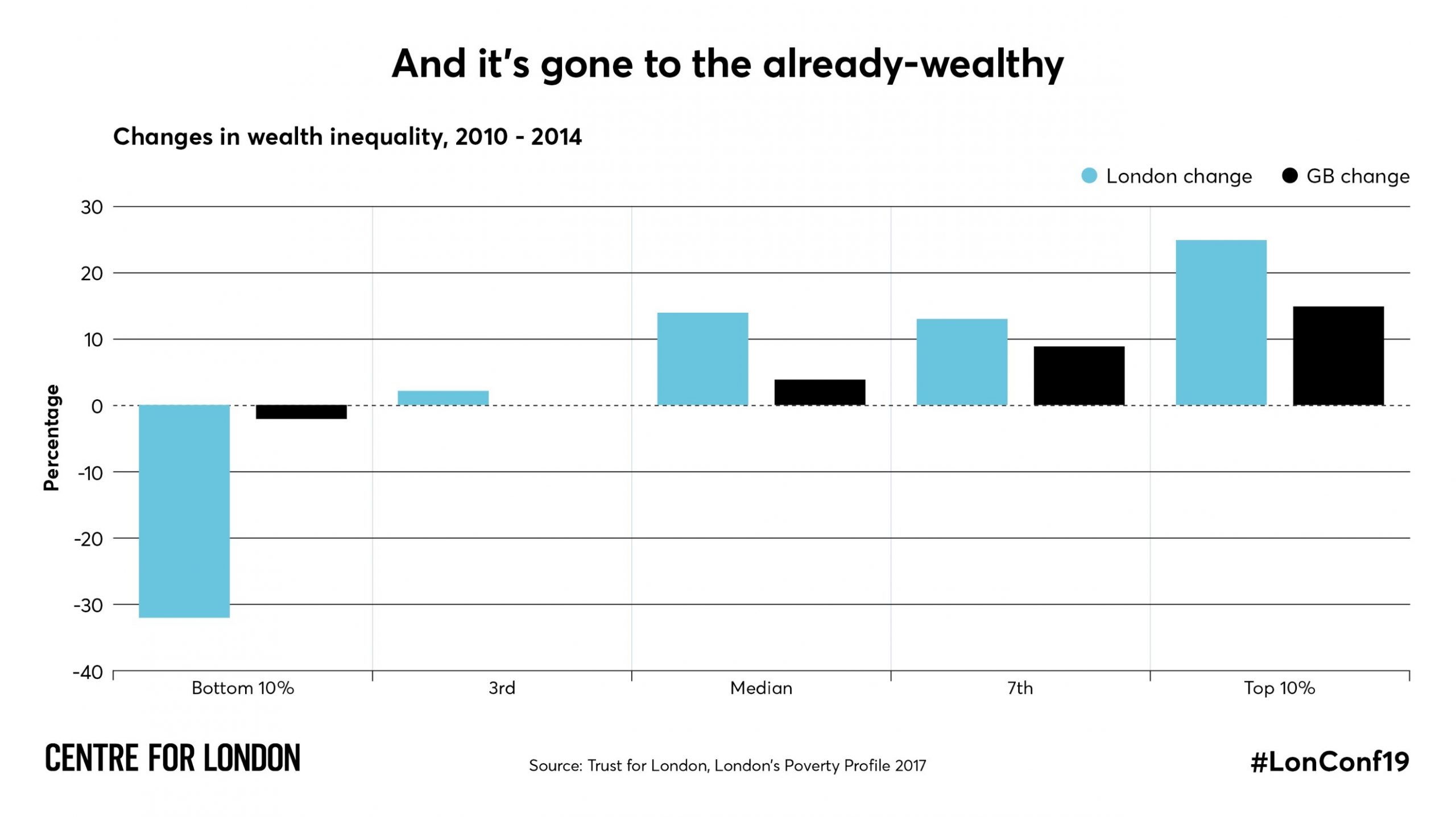 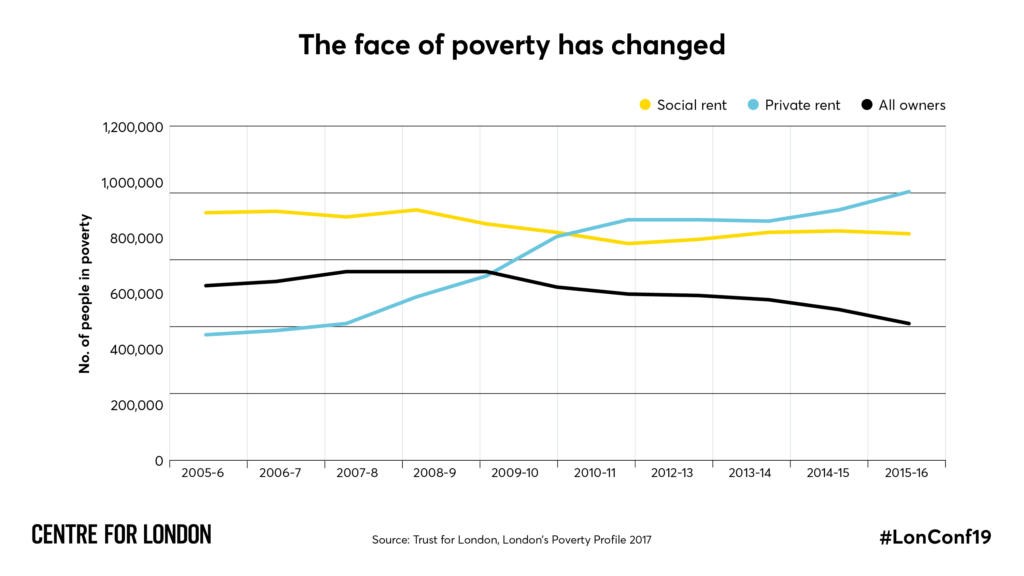 Poverty rates have also been rising among those in the private rental sector. Against the background of a growing population, we have seen a decline in the number of social tenants or homeowners living in poverty but an increase from half a million to a million among those renting privately.

Is London delivering on its promise?

Ever since the days of Dick Whittington, London’s promise has been that if you work hard, you will prosper. But it’s a promise that many Londoners don’t think the city lives up to. Perhaps this is because while London has become a more educated city – in 2004, a little more than 30 per cent of Londoners had a university degree, it’s now more than a half – many have seen their wages and living standards squeezed.

This is especially true of those who are less qualified. The proportion of Londoners in low pay has almost doubled in the last decade (from 12 to 22.5 per cent). The issue is especially acute for part time workers – from just under a third to almost a half – this is especially bad for women who tend to work part time.

And if many Londoners, especially low skilled Londoners, feel the economy not working for them, the problem could get worse. Centre for London’s research has previously estimated that more than half of London jobs are likely to be disrupted by automation in the next twenty years.

Ipsos Mori has been tracking the issues that worry Londoners most. This shows you what Londoners say is the top issue for London, rather than for the nation as a whole. It shows that worries about migration have become less salient. Worries about the economy have been replaced by worries about Brexit. Concerns about the environment have increased but not as much as concern about crime. And housing remains a top concern. The hardy perennial of London issues. 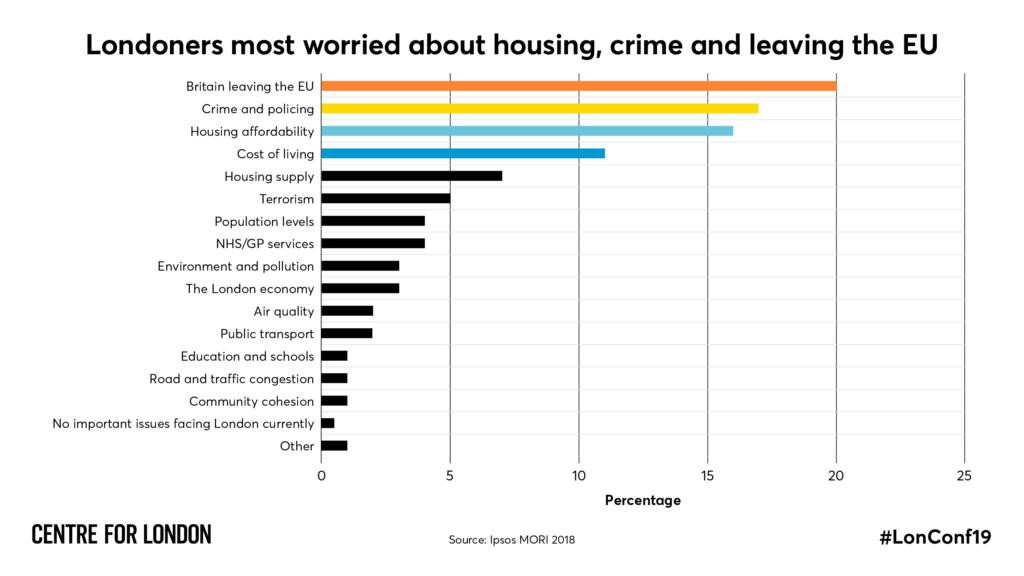 The overall picture is of a city that has got much richer in aggregate and is much better educated, and a city where people from different backgrounds get on well together. But the city has also become increasingly unequal, and in many ways a tougher place to live, especially for the those at the bottom – a city where people are most worried about housing, crime and Brexit. All this could have profound implications on the way Londoner’s vote and the next Mayor of London will need to tackle these challenges head on.

Ben Rogers is a writer and policy thinker, with a particular focus on cities, citizenship, social capital, public service reform, and the built environment. Prior to founding Centre for London in 2011, Ben was an Associate Director of IPPR from 2003 – 2007 and has subsequently led strategy teams in Haringey Council, DCLG and The Prime Minister’s Strategy Unit. Ben has written several acclaimed books on philosophy and history, published in the UK and the US, and is an experienced journalist and broadcaster. He has been involved in many London focused initiatives and sat on both the first and second London Finance Commission. Ben is also a trustee of The Yard Theatre. 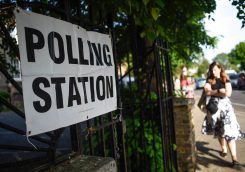